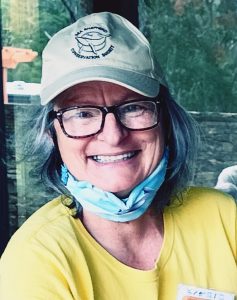 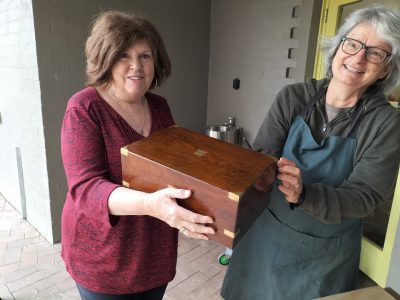 Are you from Hurstbridge, Vassi?

No, I live a little way out, in Smith’s Gully.

What skills are you offering here today?

I mainly do antique and furniture restoration, including traditional French polishing, but here I’ve fixed smaller things like a little music box and a glass figurine.

Where did you learn the skills? I notice you’ve got lots of tools with you.

I learned from both my parents, but Mum was very much the hands-on crafts person. She was a seamstress and after she retired, to help keep her occupied, we gave her a lead lighting course. She became a lead lighter, and I’ve got all her beautiful old tools. I can cut glass now. Mum loved her tools, so she’d be rapt with how they’re being used.

Tell me a story about something satisfying you have done at the Repair Cafe.

There was a woman who came in with a box that was in a mess, all smashed up – this was last month – and I could tell it was an antique. I took it home with me. I had to lever out the bottom of the box and when I got it out, I could see this old label stuck in there. It said that the box had been awarded to her grandmother at primary school in 1911. I rang to tell the woman and she got teary. She didn’t know. It was just gorgeous. She had been trying to find somewhere to get the box fixed and someone said ‘just paint it red’ so she didn’t know what to do. That box now is worth about $1800. It’s an old writing box, just beautiful.

It was much more than just fixing a box, wasn’t it? It was life-changing.

It was. And she’s going to put letters in there, letters sent to her mother from her grandmother. She said she was amazed at the people she encountered at the Repair Cafe, people who knew what they were doing.

Vassi, why have you decided to volunteer at the Repair Cafe?

One, it’s very satisfying helping people out with jobs that might be hard for them but easy for me. Sometimes all something is missing is a little pin so it’s nothing to fix it.

Two, it’s good to know that they are not going to give up on the thing they have brought.

And it must be satisfying saving something from landfill.

Special thanks to Ann Stanley for interviewing our volunteers.